The Humming of Numbers 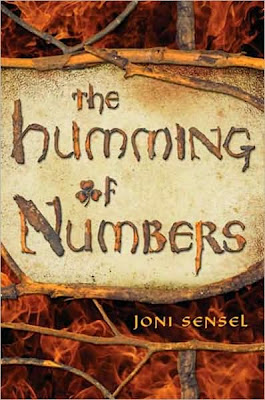 There was some question about whether Joni Sensel's new book The Humming of Numbers belonged in our Youth fiction or our Teen fiction, so I read it to see what I thought. I'm glad I did because otherwise I might not have stumbled across this exciting and well-written book.

The Humming of Numbers is set in 10th century Ireland. Seventeen-year-old Aidan is a novice monk at an abbey where he will soon take his orders, officially becoming one of the brothers. Life is static and unexceptional until the day a teenage girl arrives at the abbey. Lana is the illegitimate daughter of the region's lord, and she has embarrassed his lordship one time too many. He insists the brothers handle her, and suddenly Aidan is showing the ropes to an unusual young woman, whose demeanor is decidedly pagan. Yet he finds himself drawn to her for reasons he cannot explain to anyone. As it turns out, Aidan has a secret--he doesn't know if his ability comes from God or from Satan, but he has the uncanny ability to hear the vibrations coming from humans and objects, vibrations that he interprets as various numbers. Lana is unusual because she hums of the number eleven, and Aidan has never met an eleven before. No matter how much Aidan tries to distance himself from the distracting Lana, he can't help but be drawn to her. Then, when their village is attacked by Viking Raiders, life is thrown into chaos, and Aidan and Lana must depend on one another for survival.
When I picked this up, I wasn't expecting it to be so exciting. Attacks by Viking raiders definitely increases dramatic tension. But I was already into this book even before the bloodthirsty Vikings came on the scene. I liked Aidan and Lana, two intriguing characters who don't seem to have much command over their destinies but somehow manage to change their entire lives. Much of the plot centers on the teens' mutual sexual attraction to one another. Due to the teen characters, the emphasis on sexual tension, and the bloody Viking attack, we shelve this in the teen section. I can't see younger readers really identifying with the characters.
Great book with a ho-hum cover that may not inspire someone to pick it up. Look beyond the cover on this one. I really enjoyed it.
Posted by Karen Labels: historical fiction, Karen