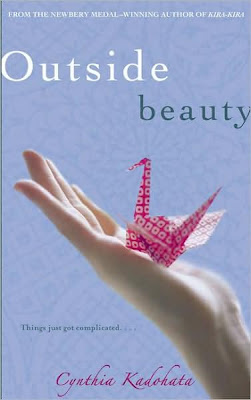 Just finished Outside Beauty by Cynthia Kadohata. Previously I read her beautiful book, Weedflower, which impressed me. So did her newest novel. Cynthia Kadohata's strength is in creating characters the reader truly loves. I've always enjoyed character-driven novels, and Outside Beauty delivers a strong narrator, thirteen-year-old Shelby, whose life with her three sisters and her outlandishly beautiful mother, means everything to her. Not only is Shelby a strong character but so are the other sisters--Marilyn, Lakey, and Maddie. Each separate character is well-developed and together they form a kind of fourth group character. The sisters' strength lies in their close relationship with one another. They have to depend on one another because they largely cannot depend upon their mother, despite the fact that they adore her.

Helen Kimura, their mother, is an incredibly beautiful woman. As Marilyn says, their mother is her beauty. Each of the daughters has a different father. Helen bounces from one man to another, to another, to another, always in search of the elusive rich man with whom she might one day settle down. But the truth is Helen isn't the settling down type. She's always running away from her problems--often a desperate, spurned lover who comes pounding at her door--and taking her daughters with her. She schools them in the things she finds most important, such as how to comport onself, how to flirt, how to be beautiful. Marilyn, who is the oldest daughter, has already decided that all she wants out of life is to get married so someone will take care of her for the rest of her life. Lakey wants to be a lawyer. Maddie, at six years old, doesn't know what she wants--only that she wants not to be given over to her father, Mr. Bronson, who is seeking custoday. And Shelby, the most awkward of the daughters and the one with the most embarrassing father, hasn't made up her mind about life either.

The girls enjoy their crazy life with their mother. They have fun together. They lean on one another, and it seems to be all they need. Since their mother isn't taking care of any of them, Marilyn is in charge of Lakey, and Shelby looks after Maddie. The girls see nothing wrong with this until a terrible accident changes all of their lives. With their mother suddenly hospitalized, each of the girls must go live with their respective fathers. It's the first time they have ever been separated. As the stern Mr. Bronson sets about strictly changing Maddie's life---spanking her for wetting the bed and monitoring her every move--Shelby becomes desperate to save her little sister and to reunite the family. In the meantime, she's living with a father she's never known. Her whole life has turned upside down, and Shelby is determined to right it once again.

This was an absolutely beautiful book. I came to love each of the sisters. I even became fond of the four fathers, each in his own way. Though Mr. Bronson emerges as the villain, Kadohata writes him in such a way that the reader can find sympathy for him. I wasn't fond of Helen Kimura, but she is a strong character too, someone whose faults are many but whose point-of-view the reader can understand if not agree with. I loved this book and my only wish was that it had been longer. The ending came a bit too abruptly for me, as if some serious editing had chopped away an orginally longer ending. Or maybe I just want to think that because I wanted to stay in the world of the sisters for a little longer. Despite what seemed a sudden ending, the book was wonderful, and I highly recommend it.
Posted by Karen Labels: Karen, Real life fiction