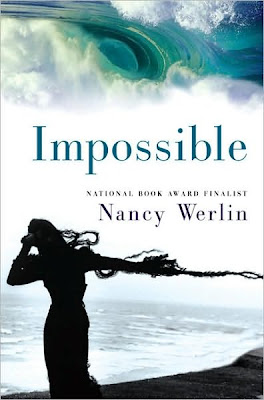 I've always found the song "Scarborough Fair" haunting and, frankly, off-putting. Author Nancy Werlin obviously felt a bit the same way, as she has taken the eerie and tragic sounding folk song, using it as a major point of the plot in her newest novel, Impossible.

In Impossible, a version of the song stands as the only "possession" passed down, word-of-mouth, from one generation of Scarborough women to the next. Seventeen-year-old Lucy Scarborough is the latest recipient of the song and the curse it represents to her family line. Long, long ago a Scarborough ancestor crossed the Elven Knight. Refusing to be his true love, Fenetta Scarborough doomed her descendants to a horrible fate: each Scarborough woman will become pregnant at age eighteen. She has until the birth of the child (always a daughter) to perform the three impossible tasks listed in the song. If she fails, she goes insane directly after giving birth. No Scarborough woman has been able to achieve the tasks and break the curse. The women go mad, their daughters go into the care of foster parents, and at the cusp of womanhood, the daughter repeats the cycle. Lucy Scarborough knows nothing of this curse when she goes off to her prom at the end of her junior year of high school. She has kind foster parents who love her, but her life is haunted by her insane mother, Miranda, who shows up at odd moments, always signing "Scarborough Fair." Tales of Elven Knights and curses have no place in Lucy's life. But soon enough, rational, level-headed Lucy becomes all too aware of the reality of the curse. She is repeating the same cycle, and time is dwindling for her to perform three impossible tasks, saving herself and her unborn daughter, as well as salvaging her first serious relationship with the boy next door.

According to the cover, this book was a National Book Award finalist. I enjoyed it and read it in just a few days. It's an unusual YA book in the sense that Lucy Scarborough never struck me as a typical teenager. She speaks in a manner much older than her years, and the way she sets about solving her problems is fairly mature. But Werlin presents her as an older-than-her-years teen, so that makes sense within the frame of the book. I was a little disappointed that the riddle of the song turned out to be very literal in interpretation. I was hoping for Lucy to have to unwind a clever metaphor, but it turned out that the tasks assigned to her were indeed supposed to be performed as listed in the song. I liked Lucy's relationship to her foster parents and her romance with next-door-neighbor/best friend/love of her life. In fact, Lucy doesn't have a bad relationship with anyone in the book. Well, except for the Elven King, that is. In this sense, I would have liked a little more conflict, but the major conflict--can Lucy break a age-old curse?--is pretty intriguing.

Does Lucy go nuts? Can a girl beat the Elven King at his game? Will I ever feel less freaked out by the song "Scarborough Fair?" Read Impossible to get the answers. (Except for that last one. The answer to that is: no.)
Posted by Karen Labels: fantasy, Karen