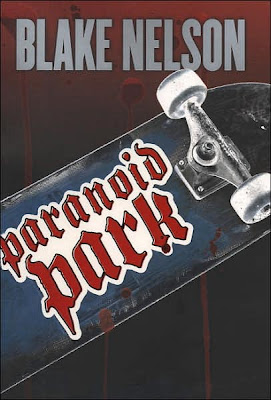 I recently saw the film Paranoid Park based on the teen novel by Blake Nelson. I liked the film and wanted to compare and contrast to the book. As it turns out, I whipped through the book in less than a day. I felt compelled to keep reading even though I already had a pretty sound idea what would happen. Knowing didn't stop me from wanting (needing, in some sense) to hear the story from the sixteen-year-old narrator himself as he records the story of a night gone wrong in a series of letters to an unknown recipient. (Unknown until the end of the book, that is). On the night in question, the narrator goes to the "sketchy" underground skate park called Paranoid Park. He meets up with a "Streeter" named Scratch who takes him to a nearby trainyard to hitch a ride on a freight train. When the train yard's security guard discovers the hitchers, he confronts them--violently--and suddenly the narrator finds himself responsible for a terrible crime.

But was it a crime? The narrator isn't really sure. Will anyone, most importantly, the police, believe that what happened wasn't intentional? In an instant the narrator's life has changed forever: "I had blown it. That was the truth of the matter. I had blown my whole life. With one wrong move, I had destroyed any chance for a normal existence." But as it turns out, no one except Scratch witnessed the crime, so our narrator is able to make a run for it, free and clear.
That's the thing, though. He isn't free. The guilt is eating him alive and not being able to tell anyone is perhaps the worst punishment of all.

What was most interesting to me in terms of the book versus the film was the pacing. The film moved slowly, almost too slowly in parts for my taste. The actual crime isn't revealed in the film until midway through, whereas in the book, the reader sees what happens--in horrifying though not over-the-top detail (unlike the film)--on page 22. In fact, the book is incredibly fast-paced, the narrative carried along by the sixteen-year-old's simple, tortured telling of the facts and the aftermath. After reading the book, it amazes me that the filmmakers were able to translate the tale to film at all--so much of the book is internal thought in the narrator's mind. A few exciting scenes, among them my favorite in the book, don't happen at all in the movie. Reading the book made me think strongly of Crime and Punishment, and I just noticed that there's a quote from C and P preceding chapter one. Cool. I understand why the filmmakers needed to approach the film differently than the author approached the book, but when all is said and done, I've got to say I prefer the book. An excellent read.

I enjoyed this book, too. It made me want to buy a skateboard, jump a freight train, and go back to high school. The issue of who was going to be held responsible for the death of the guard was never resolved, though, and that kinda bothered me. I'm glad the main character found some degree of mental peace by the end of the book. I found him very likeable.

I enjoyed this book, too. It made me want to buy a skateboard, jump a freight train, and go back to high school. The issue of who was going to be held responsible for the death of the guard was never resolved, though, and that kinda bothered me. I'm glad the main character found some degree of mental peace by the end of the book. I found him very likeable.