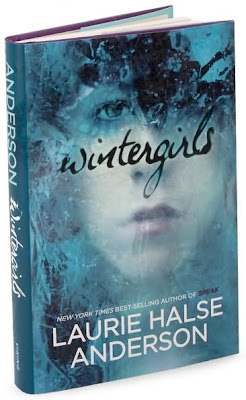 Brand new Laurie Halse Anderson novel.
Absolutely. Brilliant.
I could end my review there but that doesn't tell you much about the plot. So. . . on the first page our narrator, Lia, learns that her dearest childhood friend, Cassie, has been found dead in a motel room. This sends Lia, already on precarious balance, right over the edge. Lia's a "recovering" anorexic, or that's what her father and step-mom think. In truth, Lia is going to extreme measures to appear less thin she really is. While she weighs in at 107 pounds, she's actually down to 99, then 98, then 97. Her goal is 85. But she knows when she hits 85 she won't be satisfied until it's 75. . .
The brilliance of this novel is in the narrator's voice, the dichotomy between what she reveals to her family and what she reveals to the reader. Lia's pain, both physical and emotional, sears off the page. The author has created a strong, heartbreaking character in Lia, while the side characters--her mother, a brilliant cardiologist unable to connect with her daughter; her father, a man in denial; her step-mother, a woman who wants the best for her child and tries to fit a stepdaughter into the equation with some difficulty; her little sister, the only one Lia loves without complication, and Cassie whose ghost is haunting Lia--or are these only delusions?--are all fully realized as well. No one is completely perfect and no one is utterly demonized. The characters feel like real people, flawed, but bound together in their love for a girl slipping away from them. Anorexia is a huge part of the story, but so is grief. This isn't an "issues" novel--those often suffer from unrealistic characters and pat endings--but a human novel.
Not only are the characters great but the tension is intense. I honestly did not know if Lia would survive the book. Usually the reader is fairly certain that a main character will pull through. I wasn't certain, not at all, and I won't tell you whether Lia lives or dies. The read is too good to be spoiled.