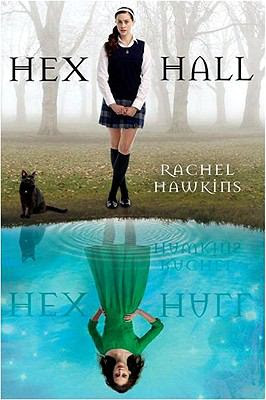 Man, I wish the next book in this series was out already! That's saying something because normally I don't like series. When I first picked up this book, I wasn't too impressed with the first chapter and I wondered if it was just another novel riding on the coat tails of the current supernatural-romance, girl-with-special-powers wave that is taking over teen lit. There are certainly many titles out there hoping to be the next Twilight--and failing miserably. This book is not one of them.
In Hex Hall, sixteen-year-old Sophie Mercer finds her witchy self sentenced to supernatural reformatory school, or Hecate Hall, a place teens with supernatural powers go when they reveal their powers too openly to mortal humans. There three types of the Prodigium matriculate--witches like Sophie, shapeshifters, and the fey (fairies.) While studying the magic arts, they form cliques, worry about their social lives, and learn that powerful groups of anti-Prodigium them dead, which makes their lessons in supernatural defense key. Students keep turning up dead in Hex Hall, drained of their blood. Suspicion turns on the one vampire in the school, Sophie's roommate and closest friend. But is Jenna really to blame? Has something powerful and dark infilitrated the one place that the Prodigium are supposed to be safe? Throw in a completely hot, unattainable warlock, the gorgeous Archer Cross, who first seems to be Sophie's enemy and then her hopeless crush plus his girlfriend, the ridiculously beautiful and icy cold, Elodie, and you have all the elements for a satisfying first book in a series.
In another author's hands, this might have fallen flat, but Rachel Hawkins gets Sophie's sarcastic yet sympathetic voice just right. Sophie is what Bella Swan could have been with some more gumption. No, scratch that. Sophie is worlds more satisfying a main character than Bella. First off, she has powers that she learns to tap. Second, she is always in the midst of the action. Humor, action, romance, catty teen social posturing. . . all of the elements of this first book in a series come together in a most satisfying manner. I enjoyed this far more than I expected and wholeheartedly recommend it to readers who are looking for a just-right blend of supernatural romance action. Now I am just waiting for the author to get the second book out into the world.
Posted by Karen Labels: Karen, romance, supernatural