By The Time You Read This, I'll Be Dead 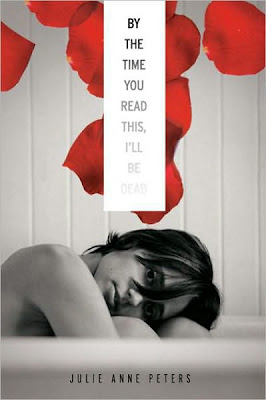 Readers who like Thirteen Reasons Why by Jay Asher, may find this a similar read. Main character, Daelyn, is the unwitting survivor of a suicide attempt and determined not to screw up her death the next time around. Having decided she no longer wants to live, Daelyn takes steps to make sure no one and nothing interferes with her exit strategy. She joins a strange online community devoted to helping the suicidal meet their ends. Or is that its purpose? As the book progresses, the role and goal of the Web site gets thrown more and more into question. I began to wonder: does this Web site even really exist in the terms of the novel? In some ways, it seems almost magical. However, the book doesn’t cross over into the supernatural but is rooted firmly in the here and now—a place Daelyn desperately wishes not to be. Then, when an odd young man starts to show interest in Daelyn, her life is shaken up more than ever. Why now? Why would someone want to be friends (or more?) after she’s decided to leave for good?

Parts of this novel rattled me. Some of the suicide information Daelyn finds on the odd web site may give readers the wiggins, as methods of death are rated by pain and length of time needed to “expire.” I believe the author was making a point with this straightforward, often jarring information—that dying isn’t pleasant, isn’t pretty, and is indeed painful. Also unsettling was Daelyn’s resolute determination to take herself off the planet, mostly because of years and years and years of bullying from her peers. The reader can see more than Daelyn can see—mainly that she’s not the awful person she thinks she is—so during a lot of the book, you feel yourself shouting at or arguing with Daelyn. No, dummy! Don’t think that!
The end has been the source of much discussion. To me, it was very clear what happened, but apparently readers find themselves on opposite sides of the “just what happened to Daelyn” debate. I’ll just say, I found the ending completely satisfying.
Posted by Karen Labels: Karen, Real life fiction, suicide