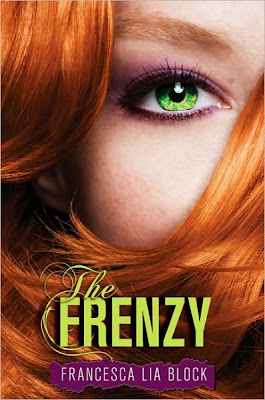 Always a huge fan of Francesca Lia Block, I eagerly read her newest book, The Frenzy just released this month. It's a perfect October read---set in a grim town that borders a creepy forest where wolves roam the woods and a series of unsolved murders have occurred. Liv has always felt different from the other small-town people she grew up with. She looks different, with her bright red hair, flashing green eyes. . . and the fine down of hair that covers her whole body. Liv has only two friends, one who is hiding his homosexuality from the conservative community, and one with whom Liv has fallen in love with and who loves her back, despite her oddness. But even from her boyfriend, Liv harbors a secret. Four years ago when she turned thirteen, something happened to her. A rage within took over when she saw that her mother had shot a wolf on a hunting trip. Liv remembers wanting to attack her mother, but instead turning and running into the woods where something she can't remember--doesn't want to remember--happened. Now the same rage threatens to take over each month. A strange woman in the woods holds the key to Liv's secret. She may have the answer to Liv's biggest question: what am I?

As always Francesca Lia Block weaves a magical tale. The Frenzy feels quite different from FLB's well-known style--the lyricism of her previous books has been replaced by a more straight-forward narrative, though this isn't a criticism. I tore through this novel in one night, eager to know what would happen to Liv, to her boyfriend, to her best friend. Liv's is a tale of longing, lycanthropy, and a search for identity.
Posted by Karen Labels: Karen, supernatural