An Unspeakable Crime: The Prosection and Persecution of Leo Frank 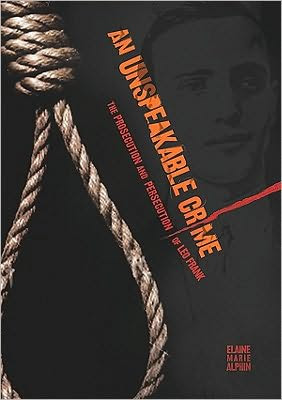 "The murder of Mary Phagan must be paid for with blood."

I read much more fiction than nonfiction but one of my major nonfic weaknesses is true crime. When I read reviews of An Unspeakable Crime, I knew I'd both want to read it and be horrified by it. I was right. It's very good, and it's very disturbing. This is a tale of twisted Southern "justice."

In 1913 thirteen-year-old Mary Phagan's body was discovered in the basement of the pencil factory where she worked. She'd gone to pick up her small paycheck, but, as the author puts it, "She never left the building alive. And she was not the only one to die." Though evidence pointed strongly toward the guilt of a black employee, the police and prosecutor seized on the idea that the Northern, Jewish factory manager, Leo Frank, had committed the crime. And they seized on that idea like a pack of rabid pitbulls, refusing to let go even in the face of the evidence.

Leo Frank was the type of man deeply disliked by the majority of Atlantans, people who were still smarting from the "War of Northern Aggression" and the aftermath of the Reconstruction fifty years after the fact. Indeed on the day Mary Phagan died, the city was celebrating Confederate Memorial Day with a parade Mary intended to attend. In the resulting investigation, Leo Frank and his family were the victims of a hideous injustice. The extent to which the prosecutor persecuted Leo Frank cannot be overstated. The prosecutor not only hid evidence that spoke against the theory of Frank as the killer, but put pressure on multiple witnesses to lie. When one witness tried to recant her statement she was badly beaten--and this was allowed to happen because she was black. The sheer number of people willing to lie or who were too afraid to speak out boggles the mind. This story is a tragedy all the way around, yet nearly 100 years later some descendants of the town still cling to the idea of Leo Frank's guilt.

Frustratingly the library's only copy of this book is missing pages 97 through 112. Instead it repeats the previous ten pages, then leaps ahead to page 113. This book is brand new, so I hope to get us a replacement soon. Obviously I missed a little bit of the tale, but I got the jist. And the jist is absolutely chilling. If you are interested in true crime and/or matters of justice, racism,or anti-Semitism,you really must read this book. (And don't skip pages 97-112!)
Posted by Karen Labels: Karen, true crime

If you want to read the original trial testimony in the Leo Frank trial it is available on http://www.LeoFrank.org

you can read the original trial testimony of the leo frank case on http://www.LeoFrank.org

No other book ever written on the Leo Frank case makes more mistakes, errors and omissions than the one written by Elaine Marie Alphin. This is not a book of subtleties and can not by any stretch of the imagination be considered reliable.