Sometimes after I've read a book, even one I really liked, the plot details grow hazy within a few months. I go to hand the book to someone, knowing I have a good reason for recommending it but not entirely sure what that reason is until I read the back of the book and jog my memory. Other books I read back in adolescence and years later the plot is still so vibrant in my mind, that I could practically tell the story chapter by chapter. Lois Duncan's books fall into that latter category. In fact, it's probably due to LD that I developed such a love for horror and suspense. I'm happy to see she's still in print, even though she stopped writing horror some years ago (more on that later), and it really says something for the staying power of her work. 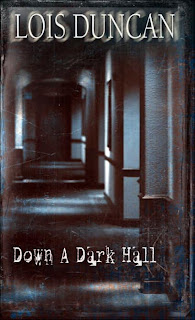 Down a Dark Hall takes place in an exclusive (and creepy) boarding school. It's so exclusive, in fact, that there are only four students in the entire place. The staff are strange, the girls are isolated, and each of them seems to have been chosen for a particular talent she holds. From the moment she arrives, Kit wants to leave Blackwood Hall, but it soon becomes clear that the staff has no intention of letting anyone go anywhere.


Summer of Fear-- after Julia's family is killed in a car crash she comes to live with her cousin Rachel. Everyone loves popular, beautiful Julia. Everyone but Rachel, that is. Only R 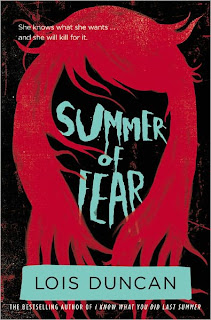 achel senses something wrong, but every time she tries to say something, she's accused of jealousy. Slowly Julia is taking over Rachel's life. First her friend flock to Julia, then her parents dote on Julia, and finally, her boyfriend falls prey to Julia's charms. But when Rachel pries into her cousin's past, she discovers that the truth about Julia is more horrifying than she could have imagined.

I Know What You Did Last Summer-- do not be put off by the somewhat mediocre horror movie of the same name. That movie is based very loosely on LD's novel, and the author was quite upset to discover they'd turned her story into a slasher movie (more later on why she was so upset.) In the book, four friends are bound by a terrible secret. They've vowed not to speak of it to anyone, though the guilt is slowly eating them alive and their friendship has suffered. It's hard enough living like this, but life turns into a complete nightmare when they begin receiving anonymous letters that read "I know what you did last summer." Who knows? And what is that person going to do? The letter is only the beginning of a terrifying ordeal for each of them. . . 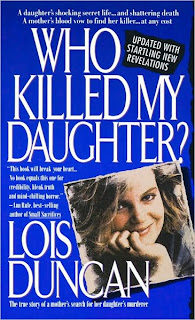 Who Killed My Daughter? ---this would be the "more later" I kept mentioning above. Unfortunately, this title is not one of LD's fictional suspense tales. Instead, it's the true crime story of her own daughter's murder. Frustrated by what she construed as police incompetence, Lois Duncan tried to find her daughter's killer herself. It won't surprise you to hear that Lois Duncan called this the hardest book she ever had to write. Read the book, and visit the website dedicated to the search for Kaitlyn's killer: http://kaitarquette.arquettes.com/index.htm

I wish Lois Duncan was still writing suspense and horror because I consider her the YA master of the genre. I only described a few of the titles, but all of them are good. Do not skip Stranger with My Face, Daughters of Eve, or Locked in Time, three more of my all-time LD favorites.
Posted by Karen Labels: horror, Karen, suspense