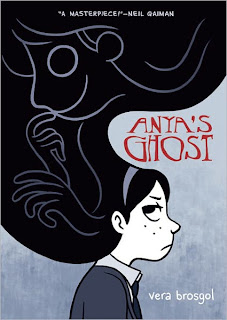 Anya is a Russian immigrant, a teenage girl who has finally shed her accent along with some extra pounds, learned how to dress like an American, and gotten into a prep school--a third-rate prep school, but a prep school nonetheless. She's a typical teenager with an annoying younger brother who has an odd tendency to bury things in the backyard, an embarrassing mother, and a less than satisfactory social life. She's carrying a torch for a basketball star at her school, and he, naturally, is dating a leggy blonde perfect girl who never gets a zit. As Anya puts it, "I just wish she'd get a zit or something to prove that she's full of pus like all the rest of us." Life is dissatisfying in an ordinary way until the day Anya falls down an old well in the middle of the woods and encounters the ghost of Emily Reilly, who fell down the same well during the first World War and whose bones still remain down there. Anya, unlike Emily, is rescued, and because she has brought a single finger bone out of the well with her, rescues Emily's ghost too. (The ghost has to stay with her bones, so she haunts Anya.) At first Anya finds her annoying, then useful as Emily spies on the basketball star and helps Anya cheat on her tests. However, having a ghost around isn't all it's cracked up to be, and Anya's original feelings of sympathy for her newfound friend lessen as Emily's ghost begins to go through some disturbing changes.

The artwork is good and the panels are easy to follow. I've heard that some readers dislike graphic novels because their panels are hard to decipher. This won't be the case with Anya's Ghost. I like the style of the art with its crisp lines. All of the story's done in black and white. The plot kept me interested and I liked the point of view of an Americanized immigrant. Anya's American nature is contrasted to Dima, the nerdy Russian boy who's tormented at school and whom Anya tries to ditch as often as possible. Mostly, though, I liked Anya. At the very end of the story, I felt the author began to moralize a bit, and this felt like it didn't match the rest of the tone. Dima faded out of the story line as did the "perfect" girlfriend of the basketball star, and those were two story lines I wanted to continue. I wonder if a sequel is in the works, because I felt like the story was ever so slightly unfinished, though it doesn't exactly set itself up for a continuation either. All in all, I'd give it eight out of ten stars, and that's not bad. Not a masterpiece, but definitely enjoyable and worth the read.