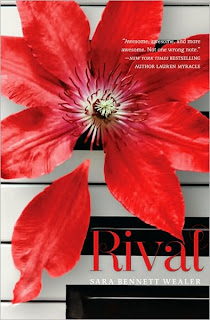 Brooke Dempsey and Kathryn Pease were on their way to being best friends once upon a time, but now their feelings for one another have turned to hatred. Brooke, Queen B. of the school, isn't given the luxury of simply disliking someone on her own. Once she's made her hatred for Kathryn clear--by punching Kathryn in the face at a Homecoming party,-- others in the popular crowd follow her lead. Kathryn, who for a few moments, found herself a part of the in crowd, now finds herself the target of Brooke's followers, who are determined to torment Kathryn in order to win imagined points with Brooke. With only her friend, Matt, to watch her back. Kathryn does her best to become invisible. But the one place she can't fade into the background is in choir class. She's the star soprano who gets the solos; Brooke's the amazing alto who commands an audience. And both of them are headed for the most competitive and important music competition in the country. Each has her reasons for needing to win, and the competition serves only to make their rivalry fiercer and more dangerous.

This novel is told in alternating first person points of view, a chapter from Kathryn's followed by one from Brooke's. It's a very successful structure, and I don't know how the author would have managed to tell the whole story otherwise. The reader, being privvy to both sides of the rivalry, understands the girls in a way they, themselves, cannot. The reader sees how misunderstandings bloomed on both sides, how the careless actions of one girl wounded the other more deeply than her friend ever could have imagined, and how outsiders to the friendship only egg on the rivalry and deepen the misunderstanding. The characters are strong, and the politics of the high school clique struck me as more genuine than in most teen novels I've read. By the end of the book, I'd become so invested in the main characters that I found myself feeling tense when the music competition finally happened, almost as if I was nervous for them, and I honestly didn't know who I wanted to win. I won't say who did, of course, but I will say I like the way the author wrapped up the plot. I enjoyed this one very much, and I highly recommend it to readers who like realistic, contemporary fiction with strong characters.
Posted by Karen Labels: cliques, Karen, Real life fiction