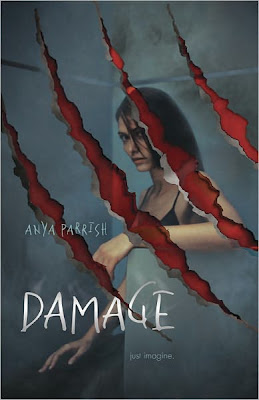 What if your childhood imaginary friend was real--and trying to kill you? That's the premise of Anya Parrish's debut novel, Damage. In a very creepy opening, the reader meets the main character, Dani, and her "friend," Rachel. Dani's in the hospital with severe diabetes, and Rachel is her favorite playmate. Until the night Rachel lures Dani up to the hospital roof and pushes her over. Dani survives but spends the rest of her stay in the hospital and much of her childhood fighting for her life against something only she can see.

Fastforward several years and we see Dani again, a withdrawn teenage dancer, a girl trying and succeeding at fading into the background. Somewhere through the years Rachel disappeared, but after a horrific accident, Rachel returns stronger and more deadly than ever. Enter the picture, the handsome, troubled Jesse, a kid from the wrong side of the tracks who has his own imaginary monster to fight. Literally. "The Thing" never even pretended to be Jesse's friend. The Thing, a frightening dragon-like creature is the monster under the bed, or more accurately, the monster on top of the bed, trying to kill Jesse. Like Rachel, The Thing first started visiting Jesse when he was a kid, and after all these years it's back. Somehow Dani and Rachel, and Jesse and The Thing are connected. Jesse and Dani meet on the bus, right before the terrible accident that brings both their imaginary nightmares back to life. Only by banding together will the two teenagers have a shot at survival.

I loved the premise of this one. I was expecting the author to take the story in a certain way, and she went off into a completely different direction and into plot lines I wasn't at all expecting. I especially like what the author does with Rachel. In spots the plot gets a bit convoluted, but the author keeps it together. Though at times the story felt precarious, and I could tell the book was a first novel, the story pays off and even leaves room for a possible continuation. A good creepy read if you're in the mood for that as fall and Halloween approach.
Posted by Karen Labels: adventure, horror, Karen