Because, really, when was the last time you saw a milk-maid?

The 12 Days of Teen Lit is proud to present: 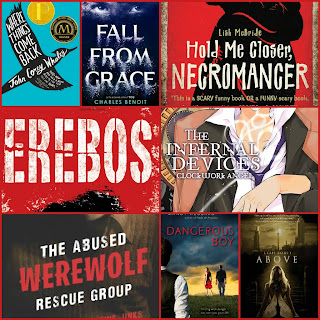 Above. When insane exile Corner and his army of mindless, whispering shadows invade Safe, a secret, underground community of freaks and disabled outcasts, Matthew, traumatized shapeshifter Ariel, and other misfits go to the dangerous place known as Above, where Matthew makes a shocking discovery about the histories entrusted to him.

The abused werewolf rescue group. When Tobias wakes up in a hospital with no memory of the night before, a mysterious man tells him he has a dangerous condition, and he finds himself involved with a group of werewolves convinced he needs their help.

Dangerous boy. In this modern twist on Dr. Jekyll and Mr. Hyde, Harper is surprised by tumbling into an intense romance with Logan, a newcomer to her Enumclaw, Washington, high school, but soon Logan's sinister twin is pulling them apart.

Erebos : it's a game : it watches you. When sixteen-year-old Nick Dunmore receives a package with a mysterious computer game called Erebos, he hopes it will explain his classmates' strange behavior. He is quickly drawn into the cryptic world of the game, where players must obey a strict code. Erebos watches its players and begins to manipulate their lives in frightening ways. It soon becomes clear the game has a deadly agenda. When Nick sets out on a dangerous mission, reality and the virtual world begin to blur.

Fall from Grace. Inspired by an intriguing girl who is nothing like his shallow girlfriend, a high school senior whose life has been mapped out by his parents makes some surprising decisions that lead him to take dangerous--but exhilarating--risks.

Hold me closer, necromancer. Sam LaCroix, a Seattle fast-food worker and college dropout, discovers that he is a necromancer, part of a world of harbingers, werewolves, satyrs, and one particular necromancer who sees Sam as a threat to his lucrative business of raising the dead.

Infernal devices. When sixteen-year-old orphan Tessa Fell's older brother suddenly vanishes, her search for him leads her into Victorian-era London's dangerous supernatural underworld, and when she discovers that she herself is a Downworlder, she must learn to trust the demon-killing Shadowhunters if she ever wants to learn to control her powers and find her brother.

Where things come back. Seventeen-year-old Cullen's summer in Lily, Arkansas, is marked by his cousin's death by overdose, an alleged spotting of a woodpecker thought to be extinct, failed romances, and his younger brother's sudden disappearance.