What is it with girls in fancy dresses on teen book covers?  It seems like there are more every day!

In celebration of 12 Days of Teen Lit, we give you 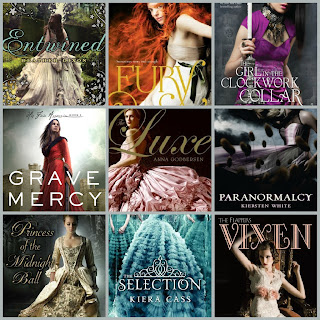 Entwined.  Confined to their dreary castle while mourning their mother's death, Princess Azalea and her eleven sisters join The Keeper, who is trapped in a magic passageway, in a nightly dance that soon becomes nightmarish.

Fury. When high school junior Emily hooks up with her best friend's boyfriend and football quarterback Chase's life spirals out of control, three mysterious Furies--paranormal creatures that often assume the form of beautiful women--come to town to make sure that Emily and Chase get what they deserve.

The Girl in the Clockwork Collar.  Sixteen-year-old Finley Jayne and her "straynge band of mysfits" have journeyed from London to America to rescue their friend Jasper, hauled off by bounty hunters. But Jasper is in the clutches of a devious former friend demanding a trade ; the dangerous device Jasper stole from him for the life of the girl Jasper loves. One false move from Jasper and the strange clockwork collar around Mei's neck tightens. And tightens. From the rough streets of lower Manhattan to elegant Fifth Avenue, the motley crew of teens with supernatural abilities is on Jasper's elusive trail. And they're about to discover how far they'll go for friendship.

Grave Mercy. In the fifteenth-century kingdom of Brittany, seventeen-year-old Ismae escapes from the brutality of an arranged marriage into the sanctuary of the convent of St. Mortain, where she learns that the god of Death has blessed her with dangerous gifts--and a violent destiny.

The Luxe.  In Manhattan in 1899, five teens of different social classes lead dangerously scandalous lives, despite the strict rules of society and the best-laid plans of parents and others. 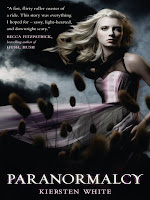 Paranormalacy.  When a dark prophecy begins to come true, sixteen-year-old Evie of the International Paranormal Containment Agency must not only try to stop it, she must also uncover its connection to herself and the alluring shapeshifter, Lend.

Princess of the Midnight Ball.  A retelling of the tale of twelve princesses who wear out their shoes dancing every night, and of Galen, a former soldier now working in the king's gardens, who follows them in hopes of breaking the curse.

The Selection.  Sixteen-year-old America Singer is living in the caste-divided nation of Illéa, which formed after the war that destroyed the United States. America is chosen to compete in the Selection--a contest to see which girl can win the heart of Illéa's prince--but all she really wants is a chance for a future with her secret love, Aspen, who is a caste below her.

Vixen.  In 1923 Chicago, seventeen-year-old Gloria Carmody rebels against her upcoming society wedding by visiting a speakeasy, while her Pennsylvania cousin, Clara, hides similar tastes and her best friend, Lorraine, makes plans of her own.

Wait..what happened to Ten? Did I miss something?

For some reason, it disappeared from the blog for a while!

But it's back now!