The Treachery of Beautiful Things

The trees had swallowed Tom whole. . . 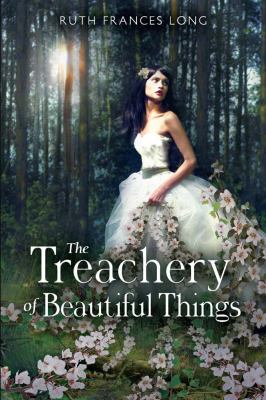 When she was ten-years-old, Jenny watched her brother disappear into the forest.  He was taken by the trees come to life.  Jenny tried to explain the bizarre kidnapping and the terrifying creature made of leaves and thorns who took her brother away from her but, of course, no one believed her.  By the time she is seventeen, her reputation for oddness has left her secluded from her classmates, Jenny's brother has never returned, and her family is shattered by their grief.  At long last, Jenny returns to the last place she saw Tom, determined to overcome her fear.  She walks into the trees and into another world.

On the other side of the tree line, the world of the Fey awaits.  Taken under the care of Jack, the Guardian of the Edge,--a handsome young man with one blue eye and one green--Jenny is supposed to leave the fey world at once.  But Jenny refuses to go when she understands that not only isn't she insane--the trees really did kidnap Tom--but that magically she has found her one chance to bring him home again.  Only Tom is the prisoner of the Queen Titania, and Jack is the slave of King Oberon, the two most powerful beings in the fey world, who both have opposing plans for Jenny. And the Queen and King are not the only dangers. Jenny quickly learns that the world of the forest holds many magics--most of them deadly.  In the most unsettling episode of the book, Jenny is set upon by redcaps, tiny, spiderlike creatures who swarm her--this scene will leave the reader's skin crawling.  Jenny refuses to stop her quest for Tom, even though the tree creature who took him keeps appearing in the forest, spiking Jenny's terror.  Jenny pushes on with her sometimes friend, sometimes enemy, Jack, and his sometimes friend, sometimes foe, Puck the Faun.  As her quest continues, her relationship with the beings of the forest grows and the danger to them all grows as well.

A good choice for fans of dark faerie.