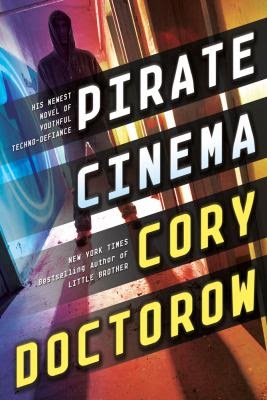 This past Monday, book club met to discuss online piracy and copyright as we talked about our experiences reading Cory Doctorow's Pirate Cinema.

In a dystopian, near-future Britain, sixteen-year-old Trent, obsessed with making movies on his computer, joins a group of artists and activists who are trying to fight a new bill that will criminalize even more harmless internet creativity.

This was a tough book for many of our teens to get through - Doctorow's writing is dense, and explains a LOT of the technical details. Some examples: building a computer, creating a multi-projector movie screening, using various editing tools to create new media...  While several of our teens loved and appreciated this aspect, it forced others to skim big chunks of the book in order to get to Trent's story.

It wasn't long, however, before our discussion moved to topics of online piracy (the illegal downloading of media that one hasn't paid for), digital rights management (a system for protecting copyright of digital media), and why the idea of stealing a DVD from the store is clearly bad, but downloading the same movie to your laptop without paying makes things seem...murky.

Overall, we had a great time talking ethics, morality, and remixing movie clips, and rated the book in a range of 6-12 "illegally downloaded songs."

If you've already read and enjoyed Pirate Cinema, but would like something with similar themes, try one of these teen-recommended reads!

1984 by George Orwell. Winston Smith works for the Ministry of Truth in London, chief city of Airstrip One. Big Brother stares out from every poster and the Thought Police uncover each act of betrayal. When Winston finds love with Julia, he discovers that life does not have to be dull and deadening and awakens to new possibilities. Despite the police helicopters that hover and circle overhead, Winston and Julia begin to question the Party. Yet Big Brother will not tolerate dissent - even in the mind...

Brain Jack by Brian Falkner. In a near-future New York City, fourteen-year-old computer genius Sam Wilson manages to hack into the AT&T network and sets off a chain of events that have a profound effect on human activity throughout the world.

Epic by Conor Kostick.  On New Earth, a world based on a video role-playing game, fourteen-year-old Erik persuades his friends to aid him in some unusual gambits in order to save Erik's father from exile and safeguard the futures of each of their families.

Fahrenheit 451 by Ray Bradbury.  The system was simple. Everyone understood it. Books were for burning, along with the houses in which they were hidden.Guy Montag was a fireman whose job it was to start fires. And he enjoyed his job. He had been a fireman for ten years, and he had never questioned the pleasure of the midnight runs or the joy of watching pages consumed by flames, never questioned anything until he met a seventeen-year-old girl who told him of a past when people were not afraid...

Little Brother by Cory Doctorow.  After being interrogated for days by the Department of Homeland Security in the aftermath of a major terrorist attack on San Francisco, California, seventeen-year-old Marcus, released into what is now a police state, decides to use his expertise in computer hacking to set things right.

Ready Player One by Ernest Cline.  It's the year 2044, and the real world is an ugly place. Like most of humanity, Wade Watts escapes his grim surroundings by spending his waking hours jacked into the OASIS--a sprawling virtual utopia that lets you be anything you want to be. Wade dreams of being the one to discover the ultimate lottery ticket that lies concealed within this virtual world. OASIS creator James Halliday has hidden a series of fiendish puzzles that will yield massive fortune--and remarkable power--to whoever can unlock them. ... And then, Wade stumbles upon the first puzzle.