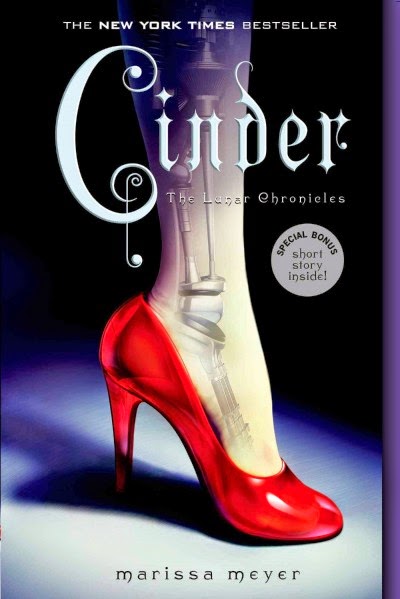 Last night, we had some welcome new faces as we talked about Marissa Meyer's awesome Cinder.

As plague ravages the overcrowded Earth, observed by a ruthless lunar people, Cinder, a gifted mechanic and cyborg, becomes involved with handsome Prince Kai and must uncover secrets about her past in order to protect the world in this futuristic take on the Cinderella story.

We had a very rowdy time discussing the many things that intrigued us about this book.  We noted how "cyborgs" like Cinder - who had a hand and foot replaced with robotic parts after surviving a horrific crash - are treated as second-class citizens, much like women and people of color have been treated in the US's history.  Cristian questioned how many of us today could be considered 'cyborgs' by the the government in Cinder's story - knee replacements, eyeglasses, pacemakers, etc.  Do these 'enhancements' make us less human?

One of our book club members mentioned the plague that is devastating the world in Cinder, and we were a bit creeped out by the similarities between the book's plague and the current Ebola crisis in Northern Africa.  Cristian mentioned the necessity of carriers of Ebola who happened to be immune to keep from running (they could spread the disease to others who aren't immune), and we then realized how similar that was to Cinder's plague - the Lunar people were immune carriers who had endangered the humans of Earth...

We also enjoyed noting the "traditional'" Cinderella elements in Cinder, and how Meyer changed them.  Especially in that Cinder's pumpkin ended up being an orange-rusted VW Bug.  So adorable!

And then came the tangents:


We really enjoyed reading and discussing Meyer's Cinder, and many expressed an interest in discussing the 2nd, 3rd, and 4th books in the series in future club meetings!

Already read Cinder, Scarlet, and Cress?  Why not try one of these book-club-suggested titles?

Alice in Tumblrland by Tim Manley.  Disney meets Lena Dunham in this illustrated humor book featuring your favorite fairy-tale characters dating and finding their way in 21st-century America; The Ugly Duckling still feels gross compared to everyone else, but now she's got Instagram, and there's this one filter that makes her look awesome. Cinderella swaps her glass slippers for Crocs. The Tortoise and the Hare Facebook stalk each other. Goldilocks goes gluten free. And Peter Pan finally has to grow up and get a job, or at least start paying rent.

Amped by Daniel H. Wilson.  In a near-future world where technologically enhanced humans are governed by a strict set of conduct laws, twenty-nine-year-old Owen Gray joins the ranks of a persecuted underclass that is planning to change, or destroy, the world.

Ella Enchanted by Gail Carson Levine.  In this novel based on the story of Cinderella, Ella struggles against the childhood curse that forces her to obey any order given to her.

Feed by M.T. Anderson.  In a future where most people have computer implants in their heads to control their environment, a boy meets an unusual girl who is in serious trouble.

Grimms' Fairy Tales by the Brothers Grimm.  An illustrated collection of fifty-two traditional tales collected by the Grimm brothers.

Just Ella by Margaret Peterson Haddix.  Like every commoner in the land, Ella dreams of going to the ball and marrying Prince Charming. But after she is chosen to marry the prince, life with the royal family is not the "happily ever after" that Ella imagined. Pitiless and cold, the royals try to mold her into their vision of a princess. Ella's life becomes a meaningless schedule of protocol, which she fears she will never grasp. And Prince Charming's beautiful face hides a vacant soul.Even as her life turns to misery, the stories persist that Ella's fairy godmother sent her to the ball: How else could the poor girl wear a beautiful gown, arrive in a coach, and dance in those glass slippers? But there is no fairy godmother to help Ella escape the deadening life of the castle. Can she do it on her own?

Sisters Red by Jackson Pearce.  After a Fenris, or werewolf, kills their grandmother and almost kills them, sisters Scarlett and Rosie March devote themselves to hunting and killing the beasts that prey on teenaged girls.

The Matrix. A computer hacker discovers that reality is nothing more than an elaborate facade called The Matrix, created by super-intelligent robots that have enslaved mankind and are using their bodies as a power source.

Once Upon a Time.  On her 28th birthday, Emma Swan meets Henry, the son she gave up for adoption 10 years ago. Henry believes Emma is the daughter of Snow White and Prince Charming, prophesied to break a powerful curse. Unconvinced, Emma returns Henry to Storybrooke, where she encounters the enigmatic Mr. Gold and clashes with mayor Regina Mills, the boy's adoptive mother, who Henry insists is none other than the Evil Queen!
Posted by Kearsten Labels: Cinderella, fractured fairy tales, Kearsten, Kearsten's Book Club, plagues, science fiction, teen fiction