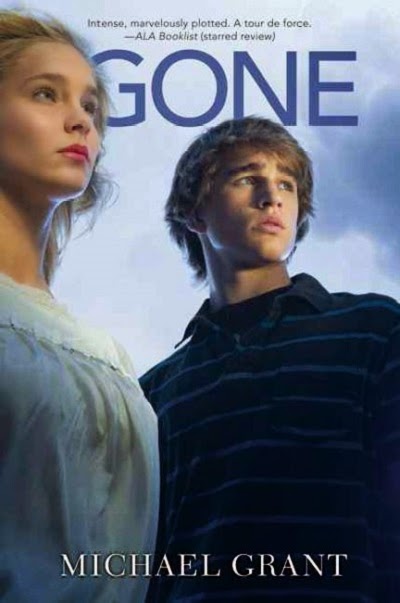 In a small town on the coast of California, everyone over the age of fourteen suddenly disappears, setting up a battle between the remaining town residents and the students from a local private school, as well as those who have "The Power" and are able to perform supernatural feats and those who do not.

We spent a lot of our time talking about characters, dissecting their reactions to their strange and scary situations and wondering which we might most be like - are we caretakers like Mother Mary?  Thinkers like Astrid, determined to try and figure out the science behind the happenings?  Or might we see an opportunity and seize it like Caine?

Most interesting was our discussion of responsibility: if others look to you as a leader, do you have an obligation to lead them?  Many of the characters in Gone look to Sam, our main point-of-view character, for guidance, due to past actions, but Sam doesn't feel at all prepared to take charge of over two hundred kids trying to survive with no adults.  Book group seemed pretty split, with half of us saying, "yes, if others look to you for leadership, clearly that means you have the skills needed," while the other half of us maintained that if someone in a leadership role doesn't feel like they have those skills, it's better for them to decline that leadership role, as a true leader needs to be confident.  What are your thoughts?

Overall, we enjoyed the book for it's plot and the fun we had in speculating about what exactly happens to those who disappear...

Already read Gone?  Why not try one of these similar reads, recommended by book club teens?

For kids trying to survive in a world without adults, try these:

The Girl Who Owned a City by O.T. Nelson.  When a plague sweeps over the earth killing everyone except children under twelve, ten-year-old Lisa organizes a group to rebuild a new way of life.

Variant by Robison Wells.  After years in foster homes, seventeen-year-old Benson Fisher applies to New Mexico's Maxfield Academy in hopes of securing a brighter future, but instead he finds that the school is a prison and no one is what he or she seems.


If you're intrigued by the way civilization and compassion can breakdown in in scary situations, try one of these:

The Enemy by Charlie Higson.  After a disease turns everyone over sixteen into brainless, decomposing, flesh-eating creatures, a group of teenagers leave their shelter and set out of a harrowing journey across London to the safe haven of Buckingham Palace.

The Way We Fall by Megan Crewe.  Sixteen-year-old old Kaelyn challenges her fears, finds a second chance at love, and fights to keep her family and friends safe as a deadly new virus devastates her island community.

If having to "play by the bully rules" (As Gone character Quinn puts it) intrigues you, try:

The Lord of the Flies by William Golding.  Following a world war, a group of school boys survives a plane crash on a deserted island and creates a hellish environment leading to savagery and murder. Two leaders--one civilized, one depraved--epitomize the forces that war eternally in the human spirit.

Nothing by Janne Teller.  When thirteen-year-old Pierre Anthon leaves school to sit in a plum tree and train for becoming part of nothing, his seventh grade classmates set out on a desperate quest for the meaning of life.

For other great reads with themes of dystopia, survival, and war, try one of these!

The 5th Wave by Rick Yancey.  Cassie Sullivan, the survivor of an alien invasion, must rescue her young brother from the enemy with help from a boy who may be one of them.

Tomorrow, When the War Began by John Marsden.  While Ellie and her friends are away in the bush, the world changes. Suddenly they are in the toughest situations humans can confront, facing life and death decisions. They are thrown into a world where they find courage, initiative, spirit and wisdom ... or they die.
Posted by Kearsten Labels: dystopia, fear, Kearsten, Kearsten's Book Club, teen fiction