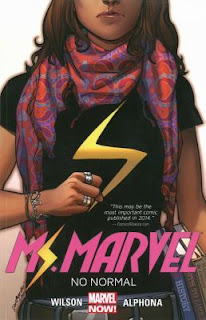 It's been awhile, but Kearsten really wanted to share our book club experience last night wherein we discussed the first volume in the trade comics superhero series Ms. Marvel: No Normal by G. Willow Wilson.

Kamala Khan is an ordinary girl from Jersey City -- until she's suddenly empowered with extraordinary gifts. But who truly is the new Ms. Marvel? Teenager? Muslim? Inhuman? When Kamala discovers the dangers of her newfound powers, she unlocks a secret behind them, as well. Is Kamala ready to wield these immense new gifts? Or will the weight of the legacy before her be too much to bear?

Our discussion rambled all over the place, from superhero costuming (as in, "what a relief it is that Kamala isn't wearing a tiny leotard with combat boobs and boots!") to strict parenting. However, the most interesting part of the meeting came as we approached the topic of racism.  We talked about the unkindness Kamala faces in her story, and the way Kamala fans used her image to defuse racist ads in San Francisco, which then led to ways in which book club members have seen and faced racism in their own lives.

We also had a bit of time left to talk about the creators' reasons for creating Kamala, and to discuss her importance in the comics world.

Already read Ms. Marvel: No Normal?  Why not try one of these teen-recommended titles?

Ms. Marvel: Generation Why (Vol. 2) by G. Willow Wilson. Who is the Inventor, and what does he want with the all-new Ms. Marvel and all her friends? Maybe Wolverine can help! Kamala may be fan-girling out when her favourite (okay maybe Top Five) super hero shows up, but that won't stop her from protecting her hometown. Then, Kamala crosses paths with Inhumanity for the first time - by meeting the royal dog, Lockjaw! Every girl wants a puppy, but this one may be too much of a handful, even for a super hero with embiggening powers.

I am Malala by Malala Yousafzai. When the Taliban took control of the Swat Valley, one girl spoke out. Malala Yousafzai refused to be silenced and fought for her right to an education. On Tuesday October 9, 2012, she almost paid the ultimate price.

Everybody Sees the Ants by A.S. King. Overburdened by his parents' bickering and a bully's attacks, fifteen-year-old Lucky Linderman begins dreaming of being with his grandfather, who went missing during the Vietnam War, but during a visit to Arizona, his aunt and uncle and their beautiful neighbor, Ginny, help him find a new perspective.

Captain Marvel: In Pursuit of Flight by Kelly Sue DeConnick. Carol Danvers is back. After changing her superhero name, Captain Marvel tries to live up to the legacy of her fallen predecessor, while facing a time-traveling adventure that's intricately linked with the woman who inspired her military career.

What Stands in a Storm by Kim Cross. Weaving together heart-wrenching stories with immersive reporting and dramatic storytelling, a gripping account of a weather event in April 2011 that saw a record 358 tornadoes rip through 21 states in three days shows how things that tear our world apart also reveal what holds us together.

Rurouni Kenshin: Meiji Swordsman Romantic Story (Vol. 1) by Nobuhiro Watsuki. In the 11th year of Meiji, in the middle of Tokyo, the tale begins. Himura Kenshin, a humble "rurouni," or wandering swordsman, comes to the aid of Kamiya Kaoru, a young woman struggling to defend her father's school of swordsmanship against attacks by the infamous Hitokiri Battosai. But neither Kenshin nor Battosai are quite what they seem...
Posted by Kearsten Labels: comics, graphic novels, Kearsten, Kearsten's Book Club, Marvel, racism, science fiction, superheroes, teen fiction