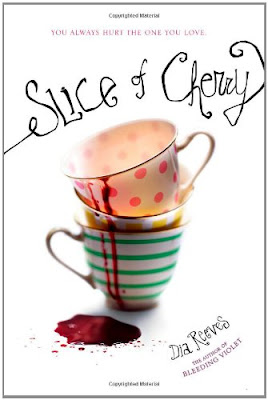 This book contains extreme violence, sexual situations, and monsters that devour unlucky folk on a regular basis. It's not for everyone, but it was definitely for me. Older teens and those who like very dark humor will enjoy it; others will be completely horrified and unable to see the humor.

Slice of Cherry takes place in Portero, not your average American town. Savvy Porterenes avoid the monsters but ignorant visitors are often eaten, their parts left strewn about town. ("Who hasn't come across a stray head at some point?" opines one of the main characters early in the book.) But human monsters also roam the streets of Portero, and Fancy and Kit, the teenage daughters of the infamous Bonesaw Killer, are two of them. They've inherited their father's lust for blood and they enjoy engaging in their talent for mayhem. Fancy also has the supernatural ability to take her sister, herself, and their victims to an imaginary spot she calls "The Happy Place," a name that becomes increasingly funnier as The Happy Place grows darker and darker. (Anything Fancy imagines becomes real in The Happy Place, and as one can guess, Fancy's imagination can be quite grim.) Fancy fights growing up tooth and nail. All she wants is her older sister, Kit and her mother, Madda. But a local boy captures Kit's dark heart and the relationship isn't doomed despite the fact that his father was the Bonesaw Killer's last victim. ("We know who you are," said Kit cheerfully. "Our dad killed your dad.") This book is about murderous urges, yes, but it's also about growing up, finding first love, and accepting the inevitability of change. And it's hilarious.

Like I said, this book is violent, yet there's a definite detachment from the violence. Horrible things are stated in a very straightforward manner, but the descriptions tend to be brief, stated rather than egregiously described. Death is just a fact of life in Portero, and the unreality of the place gives the reader some distance from the horror of what's going on. Fancy and Kit's blase attitude also makes it difficult to take the violence very seriously. Nonetheless, this book isn't for every reader. I'd suggest it for the older teen with a black sense of humor. Some people might object that this was published for teens, but the emphasis on growing pains and young relationships indicates that it clearly is for teens. The relationship between Fancy and Kit is one of the best and most unusual (yet very recognizable) portraits of sisterhood I have ever read.

Dia Reeves also wrote Bleeding Violet, her first book set in Portero. Of course, I am now very much looking forward to checking that out too.
Posted by Karen Labels: Brothers and Sisters, horror, humor, Karen