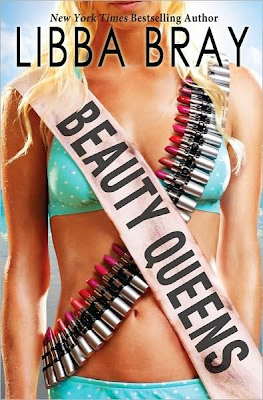 This weekend Miss California seized the crown in the Miss USA pageant. Congratulations, California, your win signifies "sixty years of beauty" according to the official pageant website. I found this news more interesting than I might normally because I am in the middle of Libba Bray's brilliant new novel, Beauty Queens. This book satirizes not just the pageant circuit lifestyle and the unreal expectations placed on the competing young women, but our entire advertising-heavy culture which seems to spend most of its time informing us that our bodies simply aren't good enough. But don't worry--there's a product for that.

Beauty Queens begins with a plane crash. All of the Miss Teen Dream contestants go down with the plane, and as the handful of survivors awaits rescue, they argue over whether their time would be better spent erecting shelters and finding food or continuing to practice their pageant regimens, since surely the show must go on! As the days go by, however, rescue seems ever more elusive, and the teen beauty queens rise to the challenge of survival. Unbeknownst to them, a shadowy, paramilitary group is also in residence on the island. And they don't want their covert and illegal operation to be discovered. Soon the Teen Dreamers have more to worry about than petty conflicts between fierce competitors. They will need to come together as a group to survive the jungle and the human threat within it. But as Miss Texas, Taylor Rene Krystal Hawkins, puts it: "It's always darkest before the ultimate sparkle!"

What a great cast of characters! It would have been easy for Libba Bray to make all the girls ignoramuses and poke fun at them for their own stupidity, but that would have been too easy, a cheap shot, and not nearly as entertaining as how she actually portrayed the girls--as a diverse group of individuals, each of whom has gone into the beauty contest for different reasons. Some compete for scholarship opportunities, some to bring down the anti-feminist contest from the inside, some to gain a sense of self worth. Each of them is human, with strengths and weaknesses that the reader can identify with. Even the most aggravating of the girls can be understood once her background is revealed, and her tough exterior crumbles to reveal the vulnerabilities beneath the surface. Libba Bray pulls all of this off with pitch-perfect satire. The humor just does not stop. Hands down, she is one of the smartest, funniest YA writers out there. I love the nods to "Lost" and the frequent interruptions to the text by messages from "The Corporation," the company which seems to own and push every conceivable beauty product on the face of the planet. How can you fail to love a book in which a hair removal product called 'Stache Off has been turned into an explosive device by a shadowy paramilitary group? You cannot! See for yourself.
Posted by Karen Labels: humor, Karen