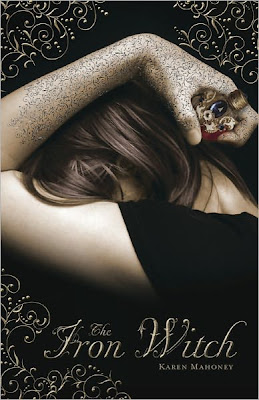 Here's a book that would fit in nicely with Kristin's upcoming paranormal romance book cafe. In The Iron Witch, teenager Donna Underwood lives a life of secrecy. She's part of the Order of the Dragon, a group of alchemists searching for the key to immortality. They also fight to keep the dark fey, evil wood elves, imprisoned in the Ironwood Forest,a magical place on the edges of the city where Donna lives. Long ago, Donna's father was killed saving her life from the dark fey. Her mother went mad. Donna suffered catastrophic injuries to her hands and the alchemists gave her several painful procedures to fix them as best they could. Now Donna's hands are filled with iron tattoos, both on the surface of her skin and beneath. Donna hides them with gloves, but it's not always easy to hide the inhuman strength she has gained from them. As the book opens, she is keeping her secret from her best friend, Navin, and she meets a mysterious and handsome older boy who seems to know more than he should about Donna's secrets.

There were several fascinating elements to this plot. Some of them could have been more fully explored, but I suspect the author held back because she plans a series. This suspicion was confirmed when I reached the end of the book, turned the page expecting more, and realized the novel was over. I literally cried out, "WHAT?!" In addition, the author has written some very clunky explanations of the supernatural world Donna lives in. For example: "Donna was marked by magic. And not just any magic, but an ancient alchemical magic that had lain hidden behind legends for centuries." This on the fifth page of the book. Awkward.

Despite the sometimes clunky passages, the frustration of the abrupt ending, and the author's also awkward descriptions of Donna's attraction to the older guy (always when they're in the midst of some critical moment of supernatural conflict) there were enough intriguing elements to keep me reading. I like the world of the alchemists and the dark elves. The nightmare creature, the skriker, was also exceedingly cool. I'm not sure I'd be driven to pick up the next book in the series the moment it came out, but if I can remember the plot well enough by the time of that release, I will need to know what happens next in the story, especially if Donna can find a way to fix her broken mother.
Posted by Karen Labels: Karen, paranormal romance